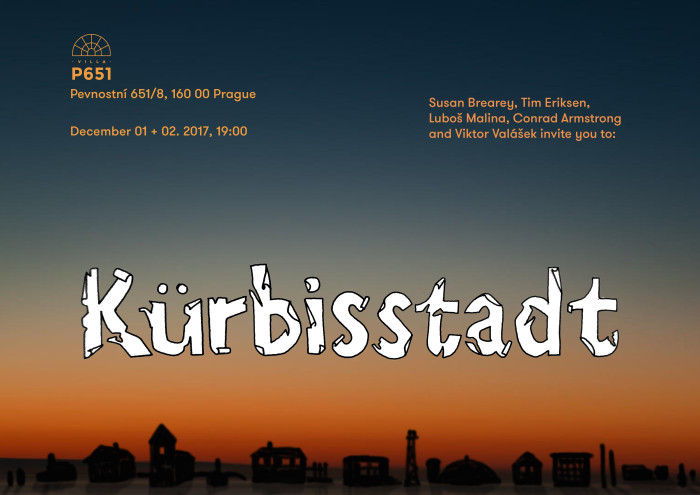 An imaginary village comes to life in a performance with live painting and music by Conrad Armstrong, Susan Brearey, Tim Eriksen, Luboš Malina and Viktor Valášek.Valašsko…New England…the Arctic Circle…Where is the village? Who lives there? What does it sound like? Are there wolves in the woods? Kürbisstadt is a village of dreams- a place of hope and fear, joyous celebration and ghostlike memories. You are welcome here. Please be our guest as the village comes to life in music, color and imagination. Welcome to Kürbisstadt.

Tim Eriksen is ”widely regarded as the best ballad singer of his generation” (BBC Radio). He combines hair-raising vocals with savvy arrangements for fiddle, banjo, guitar and bajo sexto, transforming American tradition with a ”northern roots” sound that embraces old New England murder ballads, “shape-note” gospel and haunted originals alongside Southern Appalachian and Irish songs. Tim’s latest solo album ”Northern Roots Live in Namest” (Indies Scope 2009) celebrates the power of this music in concert.Considered ”among the world’s finest folk practitioners” (Toronto Star) for his expertise in traditional song, Tim is also known for his own compositions – “strange and original works” (NetRhythmsUK) with a “rare sense of purpose” (Q Magazine) that have been included in films like the Billy Bob Thornton vehicle Chrystal and the upcoming feature documentary Behold the Earth. Eriksen’s other notable work has included extensive contributions to Anthony Minghella’s 2004 Oscar-winning film Cold Mountain as well as collaborations ranging from hardcore punk and Bosnian pop to symphony orchestra and the 2009 Grammy-nominated album Across the Divide with Afro-Cuban world-jazz phenomenon Omar Sosa.The erstwhile frontman of the prophetic groups Cordelia’s Dad (”folk-noise”), Northampton Harmony (shape-note quartet) and Zabe i Babe (Bosnian folk and pop), Tim Eriksen is the only musician to have shared the stage with both Kurt Cobain and Doc Watson (not to mention Jack White and Ralph Stanley), and his media appearances have ranged from Prairie Home Companion to the Academy Awards. Having graduated from early shows at punk mecca CBGB, Tim’s more recent performances have included his Carnegie Hall debut as a soloist in Evan Chambers’ symphonic work ”The Old Burying Ground” and two week-long stints at the Blue Note Jazz Club with Omar Sosa. In the studio, he has worked with producers including Joe Boyd, T-Bone Burnett and Steve Albini.

Luboš Malina is, according to many, the best European banjo player today. He is admired for his technical abilities, precise timing, clean sound and professional attitude. He is also an inventive writer as shown on his first U.S. release, Piece of Cake. He always attracts attention as a valuable member of the Czech bluegrass band Druha Trava (Second Grass). When describing his contribution to the group, Bluegrass Now said, “Malina’s banjo playing dazzles and adds a strikingly colorful thread to the band’s musical weave.” He is also a popular member of his part time group, The Flatt & Scruggs Revival. In his previous musical career, he played with Poutnici (and can be heard on their two albums, which were awarded the Best Non-American Recordings of the Year by the Society for the Preservation of Bluegrass Music in 1989 and 1990), an army brass band (he is professionally trained on the clarinet) and in various folk and country music groups. He has also played his 5-string banjo with symphonic orchestras and for Czech pop singers. It’s fair to say, Malina is a musician of many talents.

Born in 1964, painter Susan Brearey is known for her unique, iconic depiction of animals. In Brearey’s works, primal, totemic images take the place of the photorealistic visual details found in some other works of wildlife art. Animals become primeval shapes, rudimentary and almost featureless, set against abstract surfaces. Brearey’s evocative approach was inspired in large part by the cave paintings at Lascaux, France. Brearey first saw the paintings in the mid-1980s as a college student, an experience that turned her into a serious painter. The primitive imagery is further enriched by Brearey’s experiments with texture. Brearey has used gesso, mixtures of oil and wax, found materials like leaves and bark, and, most recently, patterns of wood grain to give each work a unique surface.

A native of rural New England, Brearey attended college at the Evergreen State College in Olympia, Washington. An art teacher at the Putney School in Vermont, she holds an MFA in painting and printmaking from Rhode Island School of Design.

Conrad Armstrong is an American artist and educator based in the Czech Republic. His work is primarily concerned with memory, association, and whimsy.

Viktor Valášek is an enthusiastic painter, para glider, and traveller who has been in Residence at the Meet Factory for five years. His multi-faceted work deals with history and sociopolitical issues at the local, national, and global levels.