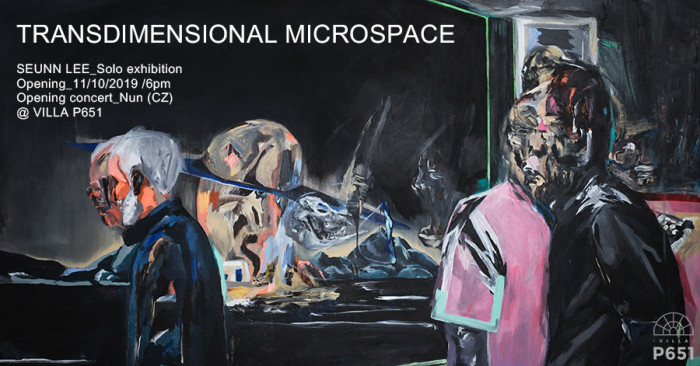 Villa P651 and Seunn Lee are co-hosting her solo exhibition ‘Transdimensional Microspace’. It is a collection of her artwork from the last ten years in the Czech Republic. In it, she explores themes of space, outer and inner; matter and emptiness; and the particles and waves that bind it all together, including those which comprise and distribute our consciousness.

Her work is populated by imagined forms such as ethereal organisms and crystalline structures inhabiting kinetically charged geometric spaces. She employs an impromptu technique of brush-touch painting without a sketch. This process is a way of finding her own aesthetic, a compromise between the fleeting expression of instinctive flourishes and the need for harmony on the canvas.

Seunn Lee is a fine artist living in Prague whose media are painting and animation. She has performed many live animation screenings with Czech improvisation musicians and has exhibited and had screenings internationally including in South Korea, Japan, New York, Switzerland, Slovakia and the Czech Republic.

NUN is a project involving two teammates from the improvisation group IQ + 1 (Petr Vrba and Michal Zboril / CZ).
Petr Vrba is a stalwart of the Czech improvisation scene, his weapons are the trumpet and electronics.
Michal Zbořil is a keyboard player who resisted the lure of the modular trend, preferring to work with analogue standalone devices. One should expect a colourful smell of electronic sounds and drone noise.